Business & Life with Corey Poirier; A Speaker With A Passion To Share His Expertise 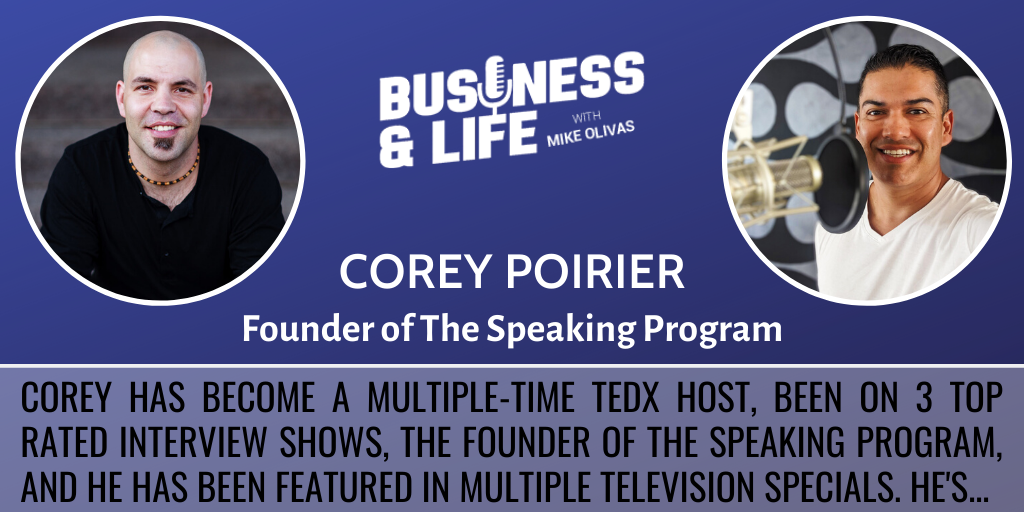 Corey was raised by a single mother, grew up in a small town, barely graduated high school (a teacher gave him a 49+1) and battled anxiety and hypochondria in his early 20’s. Since those days, he has become a multiple-time TEDx host, been on 3 top rated interview shows, the founder of The Speaking Program, and he has been featured in multiple television specials.

He’s a columnist with Entrepreneur and Forbes magazine, he has also interviewed over 5,000 of the world’s top leaders while building a multiple-six figure business in a very niche market and newly launched bLU Talks LIVE.

Subscribe to the Business and Life podcast, one of the best business podcasts for budding, young, or seasoned entrepreneurs, start-up founders, female entrepreneurs, business owners, and everyone who needs just a little bit of entrepreneurial guide and inspiration.

Corey is the founder of The Speaking Program. He may be recognizable from his appearance in some of the top-rated interview shows or from one of the multiple television specials he said as in. He is a multiple TedX host and a columnist in Entrepreneur Forbes Magazine which has allowed him to interview over 5,000 of the world’s top leaders.

(1:00) – Corey tells us something interesting

(5:30) – Why Corey believes that entrepreneurs give up

(13:00) – Go to mikeolivas.com to schedule a call and change your life today!

(15:00) Do you have goals for your business? Visit mikeolivas.com to discuss your goals for FREE!

We use cookies to ensure that we give you the best experience on our website. If you continue to use this site we will assume that you are happy with it.OkPrivacy policy