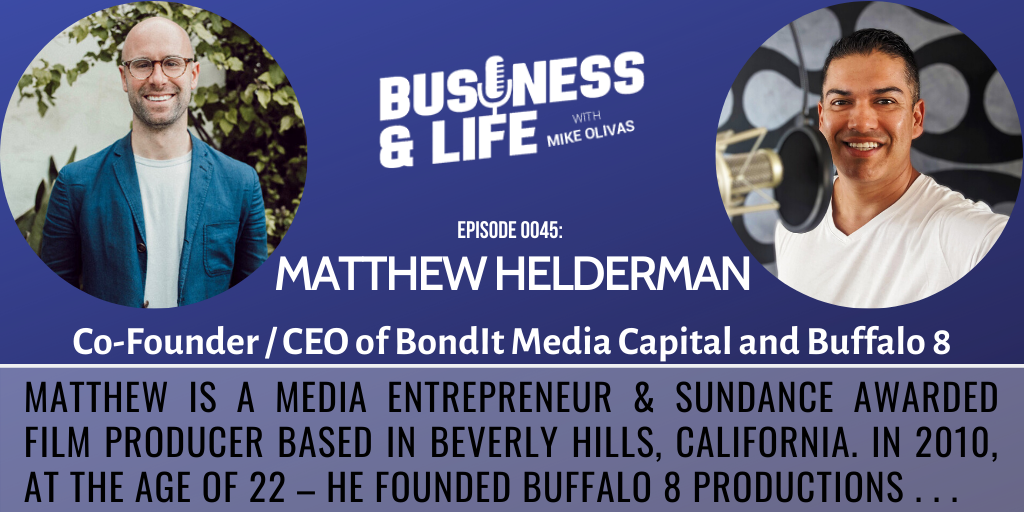 Today, we are interviewing Matthew Helderman. Helderman is the CEO and co-founder of BondIt Media Capital and Buffalo 8. Helderman founded Buffalo 8 in 2010, while an undergrad student. Buffalo 8 has since premiered projects at Sundance, SXSW, and Berlin, as well as producing the Netflix original film “Rodney King” directed by Spike Lee. In 2013, he co-founded BondIt Media Capital and has led BondIt in the deployment of over $150M of capital in over 300+ film, television, and media opportunities, while raising $30M of equity and debt for a partial sale to Accord Financial (TSX: ACD). Helderman also managed the acquisition of 30-year-old entertainment payroll firm, ABS Payroll, and serves as an Executive Director, Partner, and Board Member. Helderman graduated from Lake Forest College with a Bachelor of Arts in Philosophy.

Subscribe to the Business and Life podcast, one of the best business podcasts for budding, young, or seasoned entrepreneurs, start-up founders, female entrepreneurs, business owners, and everyone who needs just a little bit of entrepreneurial guide and inspiration.

Matthew is the founder of BondIt Media Capital and Buffalo 8.

(00:40) – Matthew tells us something interesting

(2:59) – Matthew talks about his other companies, Buffalo 8 and ABS Payroll

(7:00)– Learn how to become an entrepreneur, go to mikeolivas.com TODAY!

(14:55) – Matthew tells us his opinion on hiring friends and family

(16:55) – Why Matthew believes entrepreneurs give up